The weightless summer feelings want to be captured. "Our time is in need of sun", writes the Viennese magazine Moderne Welt in July 1932, presenting various models of beach pyjamas made of a new type of lightfast dyed fabric, perfect for the "sun cult of modern people".

The 1920s, as a reformist, experimental era, had discovered fresh air and physical culture as a source of health. Outdoor sports activities with stylishly comfortable clothing and uncomplicatedly short hair became the symbol of a new femininity that had moved away from corsets and narrow social boundaries. The Danube beach or the Adriatic Sea now finally saw cheerful swarms of women rowers, swimmers and sailors in knitted leotards and trouser suits, the very beach pyjamas.

The porcelain figure with the resonant title "Beach Pleasure", designed by Mathilde Jaksch in 1930, wears the previously much-discussed beach pyjamas as a matter of course and shows a holiday mood with a sun hat and a beach ball in her arms. She seems a little pensive. Beyond the summer, the world was in crisis. The world economy was in focus as well as societies in upheaval, political and ideological catastrophes included. But "Wochenend'und Sonnenschein" (Weekend and Sunshine) brightened the moment; leisure time was also an invention of the Golden Twenties.

Mathilde Jaksch designed no fewer than 65 figurine models for the Augarten porcelain manufactory after her training in Gmunden and with Michael Powolny at the famous Vienna School of Applied Arts. Born in 1899, she was one of the most important artists of small porcelain sculpture at the Augarten until 1963. Through her virtuoso, tender handling of porcelain, a material that can be delicately modelled, she succeeded in creating a touching expression and strong, individual presence even in the smallest format. 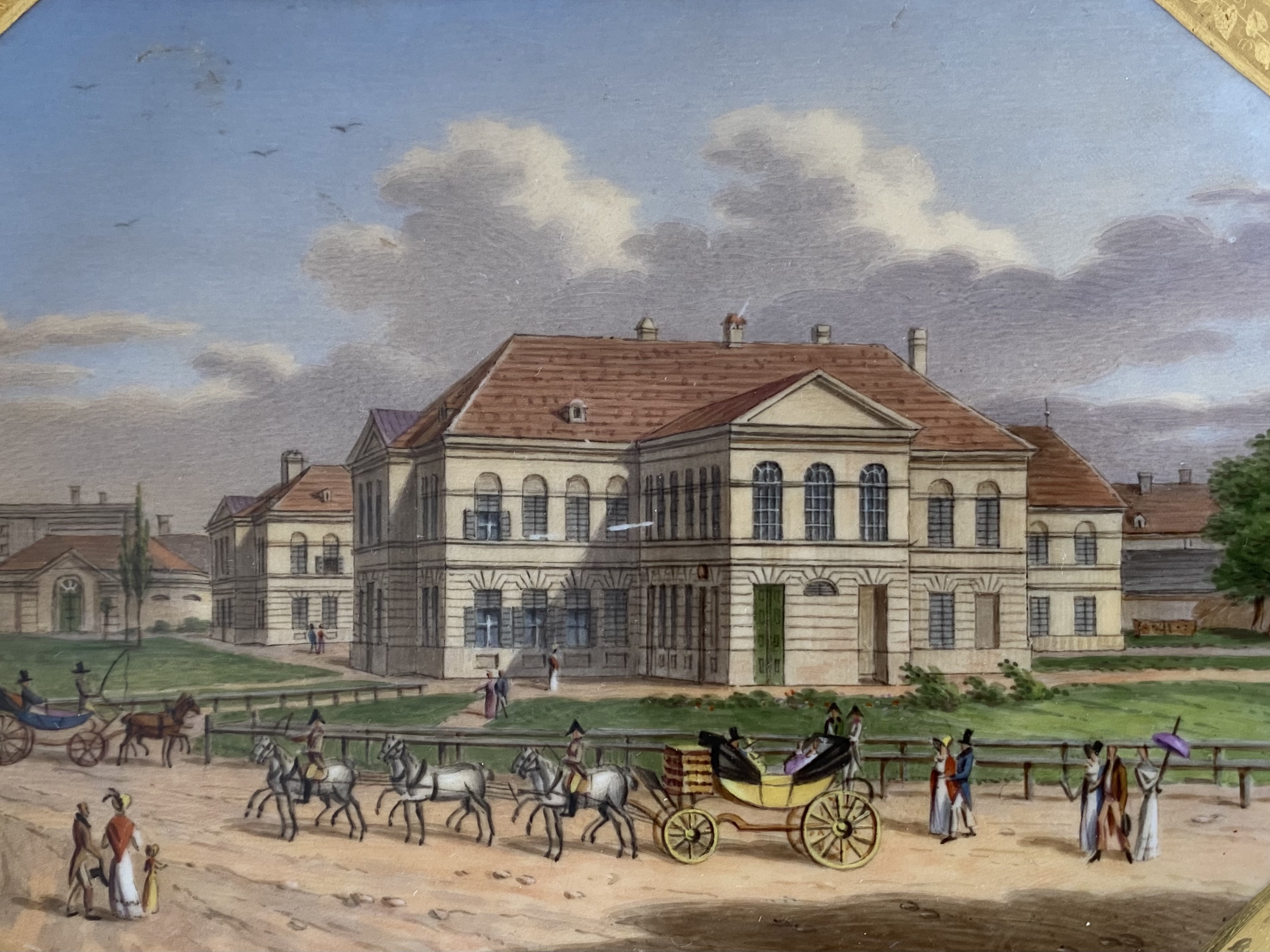 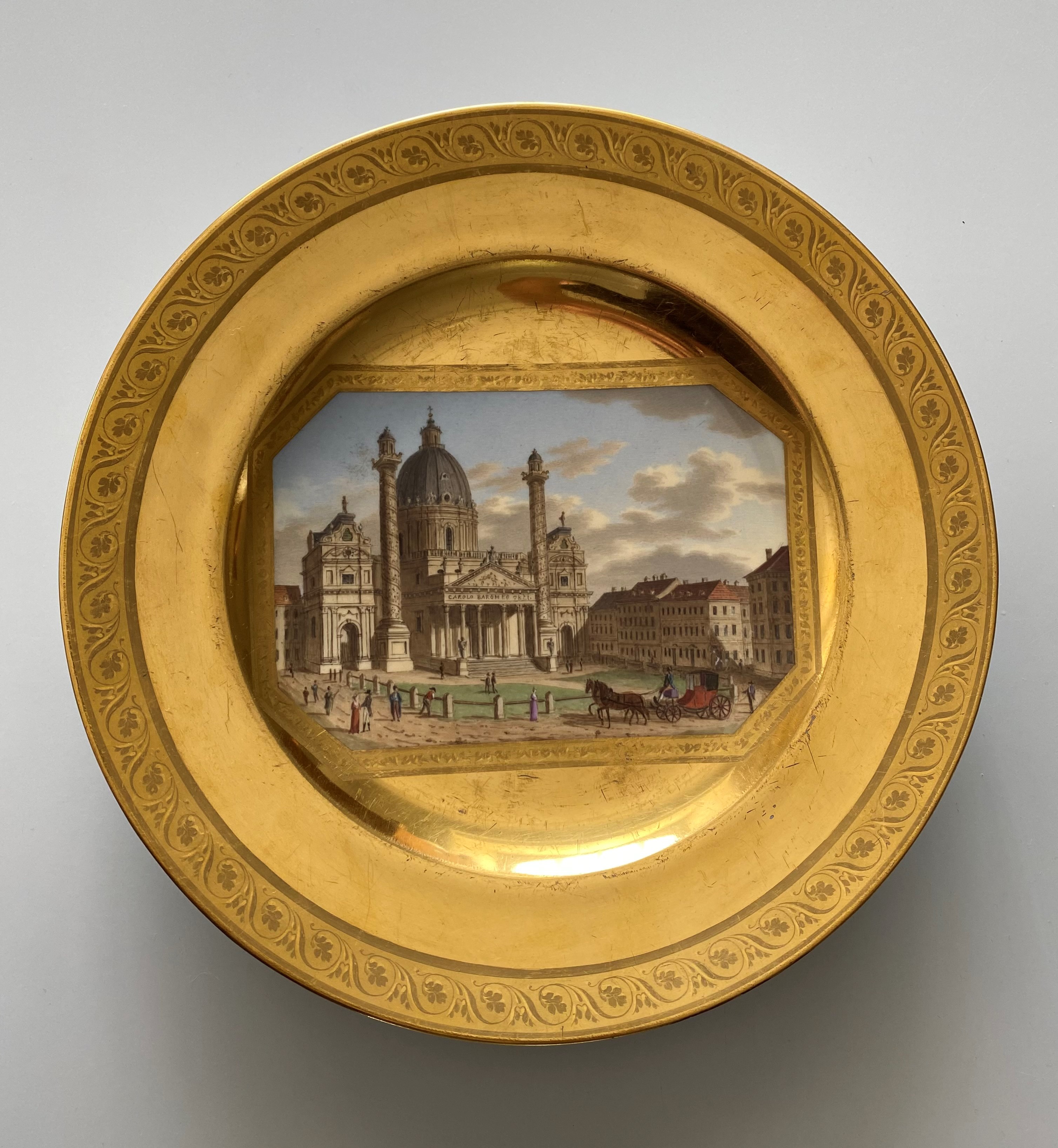 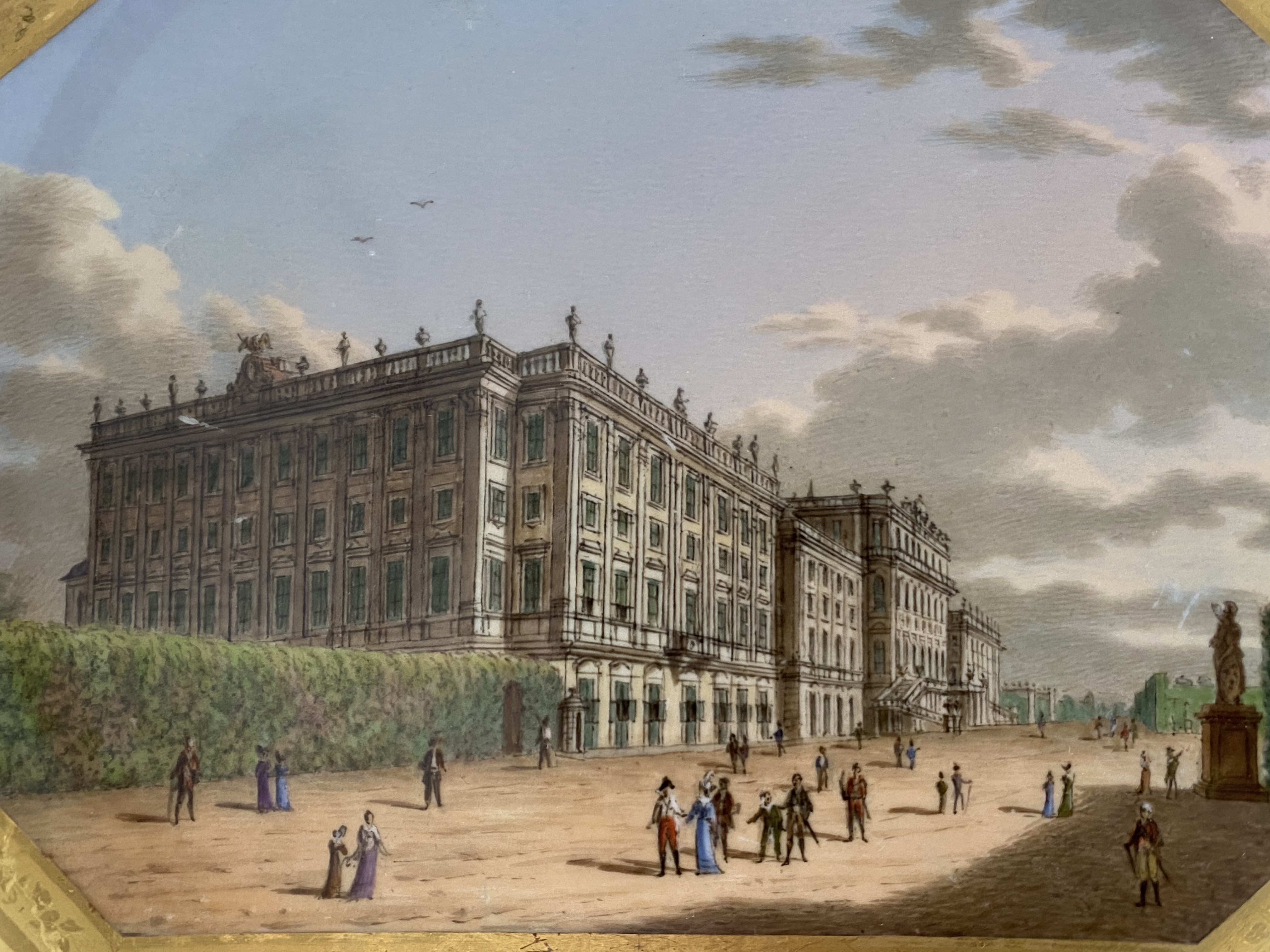 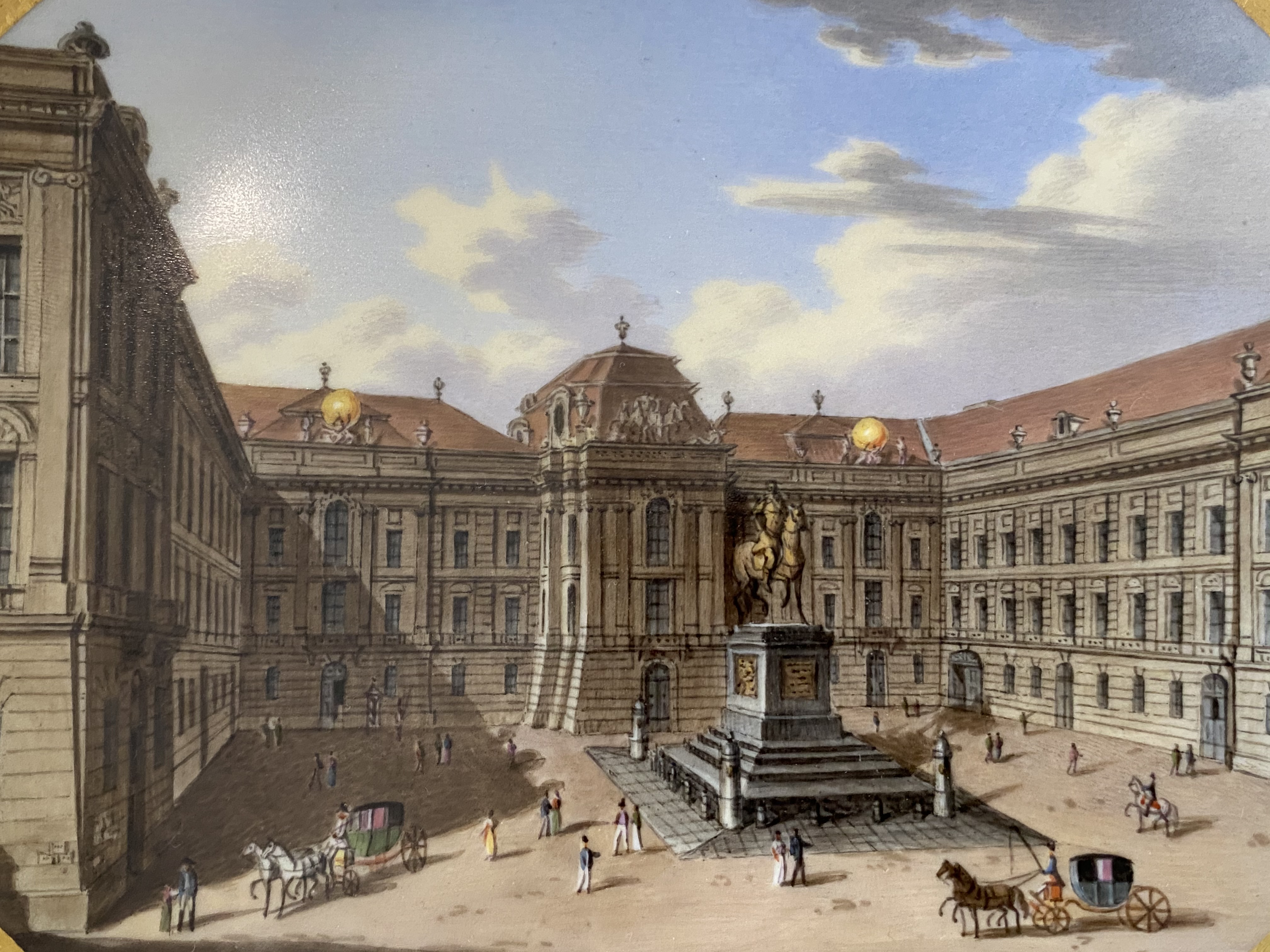 When, if not now?

Walking is an invention of the Enlightenment. In the second half of the 18th century, people began to walk through landscapes, over mountains, even the Alps, out of pleasure and joy. But also through picturesque villages and along the elegant streets of large cities. However, the walks were not judged to be entirely useless. People of the Enlightenment sought the edifying and instructive experience that could bring new thoughts and feelings. "Across the rim of their plates", as a German saying says for "out of the box", in search of knowledge.

With this new enthusiasm, the business of vedutas was booming, especially in the field of prints, which, bound into albums or published in travelogues and guidebooks, made serious travel outside or at home in the library possible.

A series of four veduta plates from the former art collection of H.R.H. Emanuele Filiberto of Savoy, Duke of Aosta, in the holdings of the Porcelain Museum in the Augarten illustrates the wanderlust of the Biedermeier period with sights of the imperial residence city of Vienna, the Karlskirche and the Josefsplatz, but also summer destinations such as Schönbunn Palace and the sensationally novel spa hotel of the Biedermeier era, the Sauerhof in Baden near Vienna captured in meticulous miniature painting on the plates. The Sauerhof spa hotel and the Engelsbad to its left were built in 1822, both according to plans by the famous architect Joseph Kornhäusel, who (among others) shaped the townscape of Baden with his airy classicism.

The museum team will soon take you on a city and country walk here to explore the present-day situation of the buildings depicted on the plates around 1822. STAY TUNED!

In May, dreams blossom. Parks and gardens are planted without fear of frost, the successes of spring sowing come to fruition. The beauty of nature is a theme that unfolds in East Asian art in a special way. Chinese gardens have fascinated the Western world ever since the missionary Matteo Ricci (1552-1610) reported on this special art form admired with his own eyes.

Ricci and his successors tell of wondrous artificial mountains, of labyrinths that make garden paths seem longer, of playing and philosophising amid flowering groves, of pagodas, bridges and birdsong.

The Chinese garden was first described in detail as a manual by the English landscape designer William Chambers (1726-1796). Chambers was able to study the artifices and surprise effects of the Chinese gardeners for himself on a trip to East Asia. The "laughing, fearful and enchanting scene" is created by serene vistas, rushing streams and dark grottos or by the sounds of the wind. It is not surprising that these depictions of a different, distant and magical world also led to fantastic artistic expressions in Europe. The fashion for chinoiserie took hold of music, literature and the decoration of interiors. Even the imperial family dressed à la Chinoise. There are reports of a banquet table with a porcelain pagoda as a centrepiece, in the shape of the legendary 15th century porcelain tower of Nanjing.

A dessert plate made of Viennese porcelain from 1805 is decorated with gold and platinum in the manner of East Asian lacquer panels. With the finest brush, the porcelain painter depicts landscape gardens and tells stories of pavilions with little bells, of high bridges over duck ponds, of carefree strollers and friendly encounters. Sections of chiselled gold relief conjure up sculptural effects and precious glitter on the dark base of the plate, which was probably never intended for eating but for contemplation and wonder. There is not a trace of use to be seen. 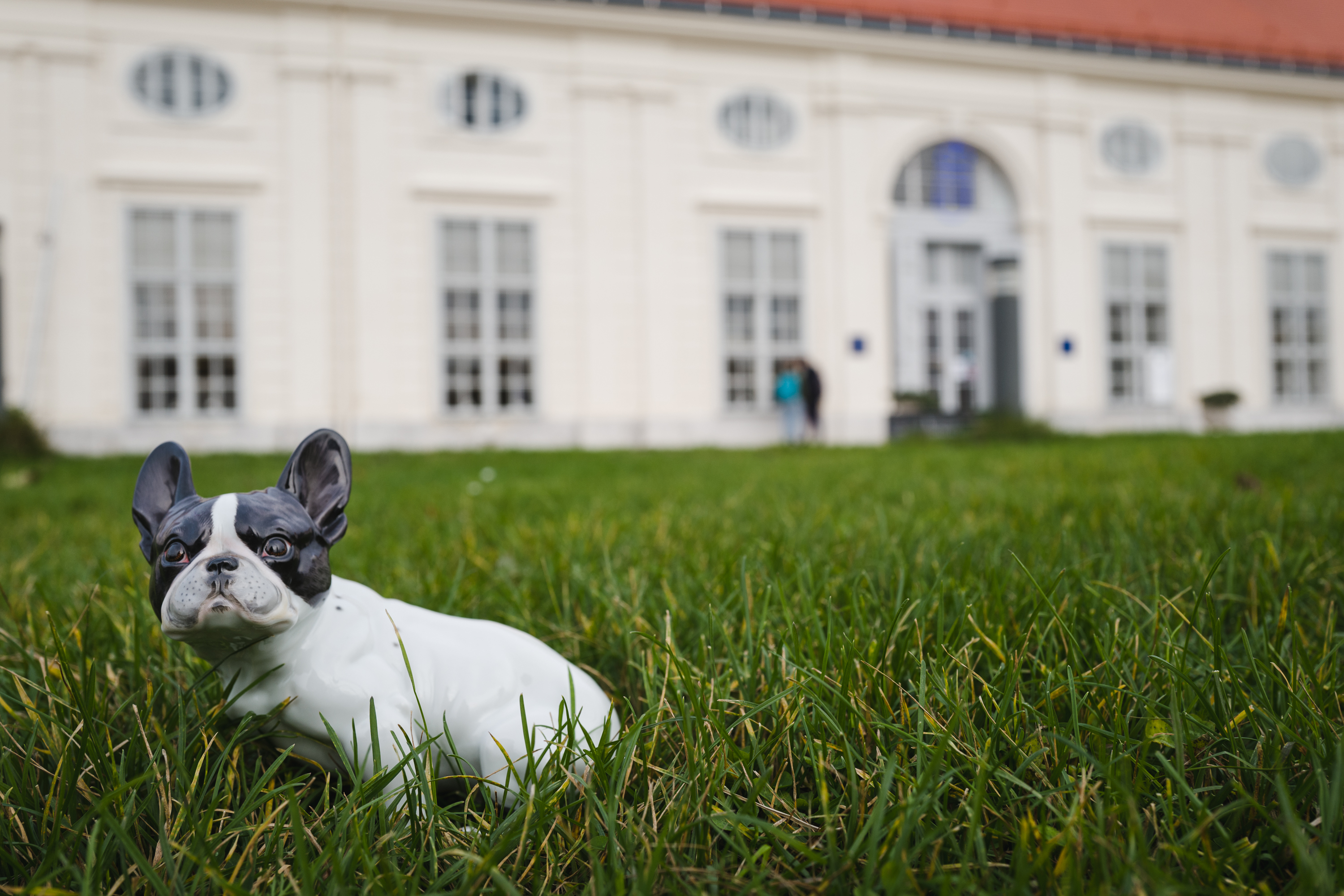 OUT INTO THE GREEN

French bulldogs were part of Vienna's cityscape around 1900, accompanying fashionable ladies on their walks through the well-kept parks. The small, muscular and friendly dogs descended from the English bulldog, which was eventually bred in France with the typical raised ears. Owners included celebrities, stage stars and crowned heads, such as the hotelier Anna Sacher in Vienna, the English King Edward VII with his black "Frenchie" Peter, the Russian Tsar family and subsequently the fashion-conscious society of the big cities, well into the Golden Twenties.

The "French Bully" made of porcelain is a work by the sculptress Karin Jarl (1885-1948) from 1925. Registered under model no. 1544, it belongs to the early designs of the Viennese artist. As the daughter of the distinguished Swedish sculptor Otto Jarl (1856-1915), she grew up amidst the versatile and glamorous artistic circles of the fin-de-siècle. Her father studied at the Vienna Academy of Fine Arts between 1880 and 1884. His future father-in-law and later grandfather of Karin Jarl, the architect Friedrich von Schmidt, promoted the portraitist and animal sculptor Otto Jarl, who incidentally also provided designs for the porcelain factory in Meissen around 1905.  Otto's daughter Karin Jarl (Jarl-Sakellarios after her marriage to the sculptor Viktor Sakellarios) was fascinated by the expressive possibilities of animal sculpture and herself created more than twenty models for the Viennese porcelain manufactory Augarten. Among her designs are hunting scenes, horses, an amusing series of animals playing music in the manner of a dance bar orchestra, a cat, a naturalistically executed desert fox and a number of different breeds of dog, including a dachshund and terrier. Franz Barwig supplied the Augarten manufactory with some impressive animal models at the same time.

Less well known is Karin Jarl's musical career. In May 1907, the magazine Sport und Salon reported on her great talent and a concert evening with her "masterly performances at the piano" as well as her appearance at the Vienna Musikverein: "One generally praised her excellent technique, the soft beautiful touch, warm feeling and independence in her performance." Qualities that also explain the fine modelling of her animal models and their subtle painting. "Generously decorative" is how her porcelains were described by contemporaries. Last but not least, it was the "musical sensibility", as the art journalist Armand Weiser wrote in 1925, and the "musical sensuality" of Viennese porcelain (Robert Breuer, 1930) that enabled the new manufactory in the Augarten to achieve its distinctive character.

The chocolate cup and its saucer were painted with pansies around 1796 and already reveal themselves as a gift to a sweetheart. Or perhaps to a close friend? Pansies, in this case viola tricolor, the tricoloured violet, also called Dreyfaltigkeitsblume in German, stands in floral language for modest, reserved love. Once also known as a Denkblume, a flower of thoughts or memory, thus the French name pensées. Pensées, the thoughts, speak for themselves and are evident in the enigmatic depiction of the medallion on the front of the mug. Cupid himself sits on a seesaw, held aloft in suspension by a lady garlanded with flowers. However, her victory is set on a fragile base, the remains of an ancient column. Cupid's bow and arrow lie on the ground out of reach of the naughty god of love. Next to the lady, a medallion with a monogram MDG perhaps points to the recipient of this gift, a second wreath of flowers is held above it. A victory wreath? A banner spreads out below the scene, 'L'amitié l'emporte'. Friendship triumphs. In the background of the miniature painting executed in dreamy sepia, a volcanic eruption can be seen. Is more than friendship being given here after all?

The outcome remains a mystery of history. What is certain is that this ensemble was an individually composed commissioned work, the bearer of a delicate message. Whether it was the one longed for? In any case, one consolation remains. The hot chocolate that was drunk in such cups. Actually called a trembleuse, the cup stands stably in a slightly higher ring in the middle of the saucer. The purpose of this invention was to prevent the spilling of a sweet cup's contents by trembler, French for 'trembling'. Hot chocolate was often drunk in the morning, preferably in bed before getting up, or immediately afterwards in front of the toilette mirror. Getting ready took a long time and was shortened by entertaining company. A pour-proof chocolate cup was a commodité, one of those immensely practical and at the same time charming novelties of the 18th century.

Gliding over the glittering ice of the Danube was one of the very latest winter pleasures in 18th century Vienna, on palace ponds and arms of the Danube. Gallant "grinders" offered ladies their services in putting on the blades. Numerous publications described the art, pleasure and etiquette of skating, as well as the health benefits, but also the divine feeling of lightness and freedom. The porcelain modellers of the imperial manufactory incorporated these topical themes into their designs. Allegories of winter often depict courtly couples or individual strollers with ice skates.

When it was founded in 1923, the Augarten Porcelain Manufactory intended to continue the legacy of the imperial manufactory in addition to promoting contemporary art. Figure models from the 18th century, such as the delicate skater with her warming muff, were reproduced with great success. The painting of the figure is based on Rococo models, such as the plain monochrome, light purple of the overdress with fur trimming and the small mouth painted in iron red. The lady seems to be just venturing her first moves on the ice-blue plinth, as the subtle sweep of her posture depicts.

The Augarten porcelain manufactory's original factory book from 1924 mentions a whole series of customers in whose order lists the figure of the "Skater" appears.

At that time, the Vienna Ice Skating Club (Eislaufverein) operated the largest artificial ice rink in the world, where almost 10,000 members indulged in the popular sport, including quite a few internationally known stars of ice dancing. Herma Planck-Szabó (1902-1986) was one of them, she was already wearing the new "American" ice skates that made daring figures possible. The model of the unpainted ice dancer, designed by Mathilde Jaksch around 1930, reflects the new self-confidence of the women of her time, who now practised all outdoor sports with the greatest success and pleasure.